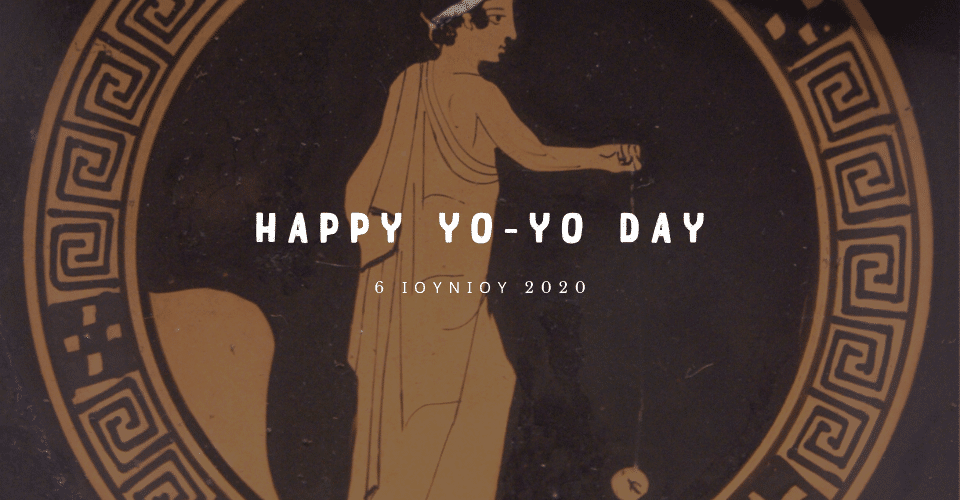 Yo-Yo Day was established as June 6th in honor of the birthday of Donald F. Duncan Sr.

Did you know that the yo-yo is considered the second-oldest toy in history? In Ancient Greece, yo-yos were made of wood, metal, and terracotta and were often decorated with pictures of the gods. To pay homage to their families, children would place their yo-yos on their family alter as a rite of passage into adulthood.

Since that time, yo-yos have been a beloved toy for people of all ages to enjoy. However, the term “yo-yo” wasn’t coined until 1920 when a man named Pedro Flores began manufacturing the gadgets at his factory in California. He gave the iconic toy its modern-day name and it’s been a hit ever since.

Today, celebrate this remarkable and historic toy. Practice a few tricks and host your own competition to see who amongst your friends has true yo-yo talent!

Duncan is most commonly associated with the Yo-Yo, the commercial success and iconic status they enjoyed during the 20th century in the United States and the world being largely the result of his marketing efforts.

Duncan is often miscredited with the invention of the Yo-Yo. The name Yo-Yo was a trademark of his company from 1930 until 1965 when the case Donald F. Duncan, Inc. v. Royal Tops Mfg. Co., 343 F.2d 655 (7th Cir. 1965) resulted in a federal court of appeals ruling in favor of the Royal Tops Company, asserting that the trademark had become a part of common speech.

Among the other companies he founded are the Good Humor mobile frozen treats franchise and a parking meter manufacturing company. Most notable among the innovations credited to Duncan is the concept of the premium incentive, a marketing tactic wherein the consumer is encouraged to collect proofs of purchase and redeem them for rewards, such as small toys or discount coupons.

He died in a car accident.

Duncan’s Birthday has been immortalized as Yo-Yo Day, June 6.

Pedro Flores Pedro Flores is widely considered as the first yo-yo maker in the US and with his Flores yo-yo created the start of an international craze.

Between 1928 and 1932, Flores started and ran the Yo-yo Manufacturing Company in Santa Barbara before selling the company and trademark to Duncan who continued to market and sell Flores yo-yos alongside the Duncan line.

Pedro Flores is most-often described as the inventor of the yo-yo, but he never personally claimed to have invented the yo-yo, always mentioning its past history as a centuries old Philippine game. In addition he is also referred to as the original patent holder of the yo-yo, however yo-yos (Bandalores) had already been patented prior to the company’s existence.

Between 1930 and 1932, Flores sold his interest in his yo-yo manufacturing companies for greater than $250,000, to Donald F. Duncan, Sr., which during the depression of the 1930s was a fortune. On this transaction Flores was quoted saying “I am more interested in teaching children to use the yo-yos than I am in manufacturing of yo-yos.”

Taking his own words to heart, he became one of the key promoters in Duncan’s early yo-yo campaigns. During 1931-1932, Flores was instrumental in setting up a large number of the promotions in the cities where the early Duncan contests were being held. In relation to his contests run just 2 years earlier with his Yo-yo Manufacturing Company, the new Duncan contests were vastly different. These contests now required a series of tricks similar to modern day contests with ties being broken by the number of loop the loops completed.

Flores stayed involved with yo-yos most of his life. After leaving Duncan in the 1930s, he set up the Bandalore Company which briefly made the Bandalore Yo-Yo. Later, after WWII, he helped Joe Radovan (a fellow Philippine immigrant) in the establishment of the Chico Yo-yo Company. In 1954, he also started the Flores Corp. of America, which briefly produced yo-yos in the 1950s.

Test your yo-yoing skills by trying as many yo-yo tricks as possible. Do you know how to do the pinwheel or walk the dog? Other ways to celebrate the day include:

Founded in 1990 in Arcade, NY by Daniel Volk, National Yo-Yo Day celebrates the yo-yo on June 6th, the date of Donald F. Duncan’s birth in 1892. Volk once worked for Duncan Toy Company as a talented yo-yo demonstrator from 1976-1978, touring the western part of the United States. As a result, Volk had the opportunity to impart some of his yo-yoing wisdom to two talented comedians. The Smothers Brothers later produced The Yo-Yo Man Instructional Video. Mr. Volk demonstrates right along with the comedians in the video, too. In conjunction with National Yo-Yo Day, the Hummingbird Toy Company produced the first of several Smothers Brothers brand yo-yos.

Say goodbye to the image of the yo-yo you have in your head. Yo-yo champions around the world are elevating this toy of our childhoods into a sport and an art form! With wild tricks that seem to defy the laws of gravity, creative twists, and the freedom to make up your own style, the yo-yo is regaining is popularity! It’s even made it to the International Space Station!

Whether you were an enthusiast as a kid, or are looking to pick up a joyful hobby, the humble yo-yo is the artform you probably didn’t realize existed as a source of endless creative wonder and community building! 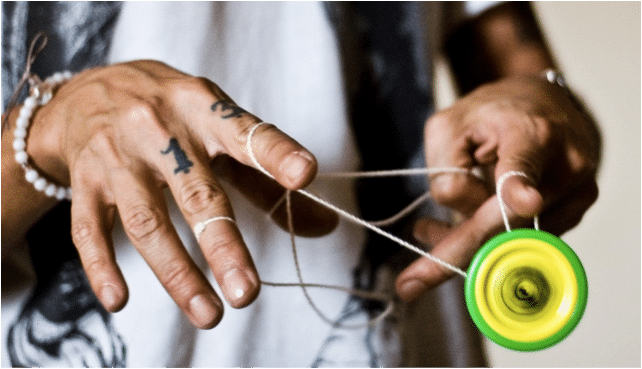 Competitive yo-yoing isn’t a recent invention. In fact, the World Yo-Yo Contest has a history dating back as far as 1932!

Now, though, it is the world’s largest gathering of yo-yo players, featuring over 1000 people from countries across the world. Needless, to say, from the yo-yo’s seemingly humble origins it has turned into a worldwide phenomenon. One that has spurred on jaw-dropping, physics-defying innovations!

To give you a taste of what these elite yo-yo players are capable of and to see what makes them tick, we have this great video from WIRED to share with you. It features world yo-yo champion, Gentry Stein. He won championships in the USA in 2013, 2015, and 2016. And in 2014 and 2019 became a world champion. Take a look…

Yo-yo is a great bridge between athletic and artistic pursuits.

It tests your hand-eye-coordination while allowing you to get creative with your tricks, the music you yo-yo to, and your own style!

The remarkable community around the yo-yo strikes me as one of its greatest assets. Like so many activities we choose to do as amateurs or professionals, the communities we build around the things we love are equally as exciting as the activities themselves.

There’s something precious about finding a positive niche community!